Inspired by the Sisters of the Good Shepherd, the National Advocacy Center advocates on a national level for laws that benefit the poor and the disenfranchised – particularly families, women and children.

Since its founding, the Congregation of the Sisters of the Good Shepherd has been devoted to the care, rehabilitation and education of those in difficulty, especially women and girls.

Building on the community's expressed desire to explicitly link its direct services to work for change in the structures of society, Good Shepherd Position Papers were written following the 2009 Congregational Chapter of the Sisters of the Good Shepherd.  The papers clearly articulate a longstanding commitment to social justice, and outline the issues of particular importance to the religious community.

Learn about these focus areas and how the National Advocacy Center is addressing them through its work on Capitol Hill.

Our Advocacy Goals & Priorities for 2022 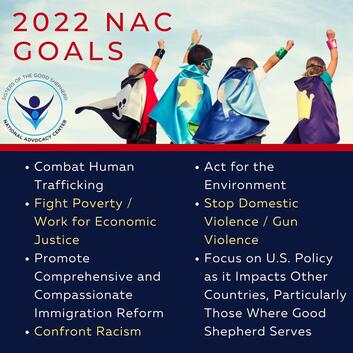 NAC 2022 Advocacy Priorities
NAC’s advocacy priorities are determined by the concerns of the Congregation of Our Lady of Charity of the Good Shepherd, its U.S. social service agencies and an underlying commitment to those on the margins, particularly women and children. Focus areas also are influenced by what is moving in Congress and the work of our coalition partners.

Prevent Human Trafficking
Grounded in the Congregation’s world-wide reputation for combating trafficking, NAC seeks to raise awareness, educate, and work for policies to eradicate human trafficking in all its forms. We pursue solutions informed by the experiences of survivors and also work for policies that help them heal.

Fight Poverty / Work for Economic Justice
U.S. Good Shepherd social service agencies partner and grow with clients – primarily women and children – so that all succeed and thrive.  NAC seeks policies to this same end; among them, the guarantee of basic safety net programs, adequate housing, a living wage, economic equality for women, support for at-risk youth, including those in foster care, and increased health funding and resources.

Promote Comprehensive and Compassionate Immigration Reform
Those who come to the U.S. fleeing poverty and violence, seeking a better life, deserve access and welcome – this is among the U.S.’ foundational values, not to mention our moral framework. As a country of great wealth and power, we also have great responsibility.  The undocumented, among them immigrant children brought to the U.S. through no fault of their own, deserve a pathway to citizenship.  Immigrants are woven into the fabric of this country, and many have served on the front lines during the pandemic.  NAC continues to raise its voice with them to ensure they receive attention and support.

Confront Racism
The events of the summer of 2020 – with the deaths of George Floyd, Breonna Taylor and other people of color at the hands of police -- represented a boiling point in our country.  Added to that was the pandemic that further revealed the starkly different realities that exist in the U.S. for different racial groups.  NAC, the Congregation, its agencies and many organizations are engaging in internal and external work on racism and racial justice.  And, as it is ours to do, NAC pursues in its coalition work federal policies with racial equity and inclusion at their core. This includes eliminating unjust restrictions to the ballot box.

Act for the Environment
NAC seeks a deeper respect for creation, recognizing the indisputable connection between people and the Earth. The organization is moved by what is certainly the critical issue of our time:  human-influenced climate change.  NAC is particularly engaged in activities focused on environmental problems that disproportionately affect people living in poverty and people of color.

Stop Domestic Violence / Gun Violence
With the Congregation’s special concern for those experiencing domestic violence, NAC focuses on legislation to protect victims and stop the incidences from developing.  The reauthorization of the Violence Against Women’s Act is a perennial focus for the office. Gun violence, given its interplay in domestic abuse as well as its increase in the society in general, has become another area for NAC’s voice.

Focus on U.S. Policy As It Impacts Other Countries, Particularly Those Where Good Shepherd Serves
With its ties to an international congregation with ministries in more than 72 countries, NAC is concerned with how U.S. policy impacts other parts of the world, especially developing nations. The Congregation of Our Lady of Charity of the Good Shepherd sees itself as a global congregation, and the experience of the COVID-19 pandemic has further demonstrated our interconnectedness – hence this focus area.